A couple of weeks ago, fresh on the heels of the Molokai crossing, I thought it might be fun to sign up for the Kahala Challenge, which is a sprint triathlon that substitutes paddling for bicycling (thus, an 800 meter swim, 2.4 mi run, and 2.5 mi paddle. For the paddling portion, you can choose an outrigger canoe, standup paddle, or paddleboard). I figured I was in great shape and didn’t need to train for what couldn’t be more than 90 minutes of exercise, even though I’ve never actually done a triathlon before. Plus, the event takes place at Kailua Beach Park, so it would be very convenient.

I registered, and then started trying to learn what is actually involved in triathlons. I have never swam competitively in my life. (Basically because: I am a terrible swimmer.) The first thing I learned is that the start, where 150 swimmers race into the water and all head toward the same buoy, is a chaotic moment where people bash into each other and so forth. This got me a little concerned and I wondered how to train for it, so I googled and found the following 30 second “swim start training video”:

I highly recommend you pause, right now, and view this video before reading on so you can better appreciate my training regime.

The next thing I learned is that an important strategy during the swim portion is to “draft” another swimmer by basically getting so close behind them that your outstretched hands are almost slapping their feet. My friend Jennifer who has actually done triathlons offered to meet me at the pool and teach me how to do it, but I couldn’t get it together in time and so I figured I’d just try to learn how to do it during the actual race.

The day of the race arrived, and I was down at Kailua Beach at 6:45am to set up my “transition area”. Oh, that’s another thing: in triathlons, there is this concept of a “transition”, where you switch from swimming to running, and running to (in my case) paddling. I wanted to wear shoes during the run, so I had to lay them out and get my socks and so forth. I had my ratty old gym shoes and my CostCo sweat socks all laid out in a row.

As I looked around me, I became SUPER intimidated. Everyone looked like they could be on the cover of Triathlete magazine, or BodyBuilders Monthly, or at least High End Gym Fashion Weekly. They were wearing special lycra racing swimsuits and had super fancy running shoes, sunglasses, and hats. I had the epiphany, way too late, that there are a lot of people who take triathlons really seriously, actually train for them, and were about to eat me for breakfast.

They wrote my number (lucky 13!) in sharpie on my shoulders and gave me a timing chip to strap to my ankle, which would record my swim, run, and paddle time, as well as the time I spent in the transition area.

Finally, the organizer told us to get organized in the start chute, with strong swimmers in the front rows and weaker swimmers in the back rows. I pushed my way to the very back and asked the people around me where the “doggy paddle row” was, which got a couple of nervous chuckles out of them.

The horn sounded, and we were off. I jogged into the water and started swimming. It was, indeed, chaotic. After about 50 yards, I found myself right behind another swimmer and thought to myself, “Hey, this must be drafting!” So, I just stuck right behind that person for the next 400 meters. It was great: I found that I was not swimming very strenuously, and even better, I didn’t need to put my head above water to see where I was going; I just trusted the person in front of me to do that.

Unfortunately, during the second half of the swim, I started to get bored with drafting my swimmer and decided to try to improve my positioning. So, I looked up and saw about 20 yards of open water between the swimmer I was behind and the next group of swimmers. That didn’t seem very far, so I struck out solo for the next group. As soon as I got parallel with my formerly-drafted swimmer, I learned three new things: (1) I really had been drafting for the past 400 meters, (2) Drafting really works, in that swimming by yourself is way, way, harder than cruising along in someone else’s wake, and (3) Catching up to swimmers who are 20 yards ahead of you and who are probably much better swimmers than you are is probably not a great idea.

I swam like the dickens for a few minutes and found myself right between the two packs of swimmers with no one to draft and feeling quite tired from the sudden exertion. I briefly toyed with the idea of stopping and floating to let my original swimmer catch up to me so I could start drafting him again, decided that would be too embarrassing, and so I redoubled my efforts and after a few minutes found the welcome site of bubbles in the water just in front of me, indicating the feet of the person in the rear of the next pack. I resolved to draft this person all the way to the beach, and even beyond if possible.

So that was the swim portion. The next phase was the run. I got into the transition area, found my shoes, realized I hadn’t untied them before the race and the laces were in a knot, finally got them untied, pulled my socks on, got my shoes on, and stumbled off into the run. While 2.5 miles is not normally a very challenging distance, this course was along a sandy beach and, of course, I’d just spent 20 minutes or so swimming. Basically, the run was totally horrible and I could not wait for it to be over.

The third leg was the paddling, and by the time I arrived back into the transition area I was utterly spent. I struggled with my shoes, my socks, took a drink of gatorade, and finally hoisted my boat onto my shoulders and slogged off toward the water.

To my surprise and delight, my Molokai canoe training finally made its first appearance of the day. Despite the fact that I was really tired, as soon as I was in my boat and paddling my body responded as if to say, “You are tired. And yet you are paddling. So what else is new?” Plus, I knew it was only 2.5 miles of paddling, all within Kailua Bay. Duck soup.

It was interesting to examine my times by various portions of the race (Swimming, T1, Run, T2, Paddle). Basically, my transitions were terrible, I was one of the worst of the 119. It looks like I was reading the Saturday paper out there or something. My only competitive leg was the paddle. But, in retrospect, I guess that makes sense because that was the only leg that I actually had some training for.

Joanne came down to the beach after it was all over and snapped some photos, one of which you can see here: 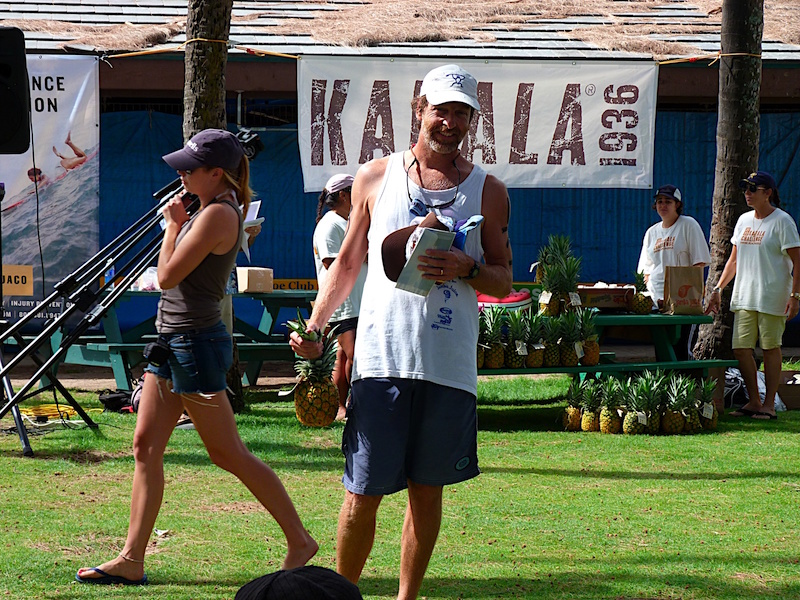 I won a pineapple!