Users of Git, particularly with cloud-based services such as GitHub, CloudBees, and Heroku, must have a very basic understanding of public key authentication and encryption. This article provides a minimal introduction along with a few use cases.

To understand public key authentication and encryption, it helps to understand “private” key encryption. The canonical example of private key encryption is the Caesar cipher, in which each letter is replaced by a letter a fixed distance away from it in the alphabet. For example:

So, the word “DOG” is encrypted as “FQI”, and the private key, which both sender and receiver must know, is “2”.

Public key encryption requires a pair of keys: a public key and a private key. The key property of these key pairs is that if a message is encrypted with one of the keys, then you can decrypt it only if you have the other key. In general, the user keeps their private key(s) private, and allows anyone access to their public key(s). This solves the problem with private key encryption because there is no need for a secure channel with which to communicate the public key.

So, for example, if you want to send user Foo an encrypted message, you get their public key, use it to encrypt your message, and send the encrypted message to Foo, who can decrypt the message using their private key.

An aside: Making the keys

The most popular method is called RSA after the initials of its inventors (Ron Rivest, Adi Shamir and Leonard Adleman). To generate a pair of keys the procedure is:

It is possible to prove that, with N, p and s chosen in this way, M**ps mod N=M for all messages M. But you don’t really need to know the theory; all you need to understand in practice is that it’s really, really hard to figure out the private key given just the public key and/or some example decryptions. Thus, as long as you keep your private key truly private, public key encryption is a really good way to provide secure communication and authentication.

When transmitting source code and other artifacts between (for example) your local work space and the GitHub hosting service, the git protocol uses SSH for communication. SSH, in turn, relies on public key encryption for both authentication and secure communication of the data. So, one of the parties to git-based communication needs to have both a public and private key, and the other party needs to be given a copy of the first party’s public key.

Here is the golden rule of git-based communication: The originator of a git command must have both a public and private key, and must have previously provided a copy of their public key to the receiver of the git command.

This should seem intuitive and obvious at this point: when invoking git to either push or pull code from a remote repository, you are sending a command to the remote service, who will want to authenticate you. It authenticates you by already having a copy of your public key, so that it can decrypt a message the underlying SSH protocol has encrypted using your local private key.

Let’s now quickly look at a few different use cases to see how the golden rule plays out in practice.

Use Case: Local Workspace to GitHub

The simplest use case is the typical situation with GitHub: you have created some code in your local work space, and you want to push it to GitHub. In terms of the golden rule, you are the originator of the git command. Here’s a picture to make that more clear: 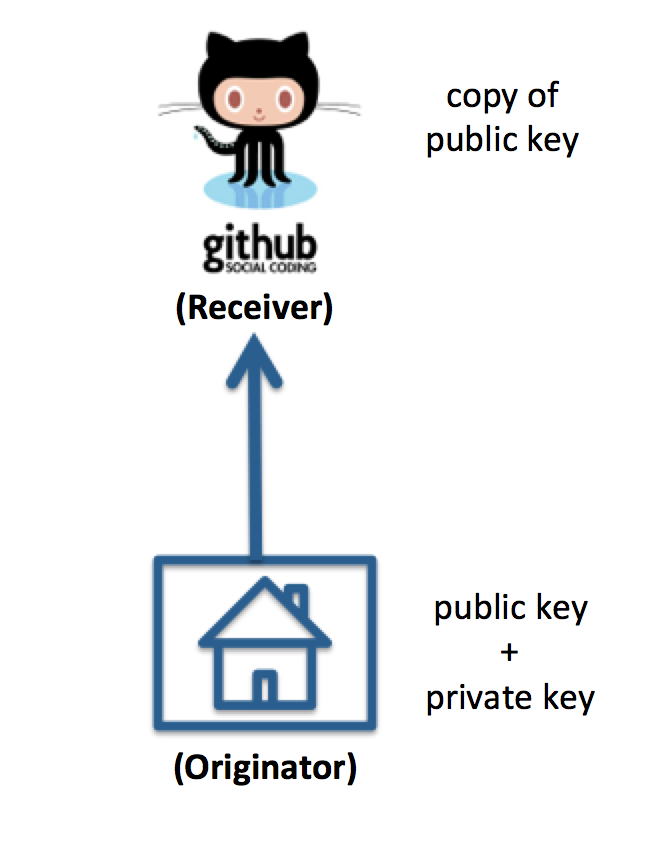 Your local work space is “home”, and since you are the initiator of the git command, you must have both a public and private key and must have given GitHub a copy of your public key.

Use Case: CloudBees to local workspace

Here’s a slightly different situation: you are using the CloudBees platform, and have used their “ClickStart” facility to create an example application in the cloud. Now you want to download the code generated by CloudBees to your local work space. Here’s a picture: 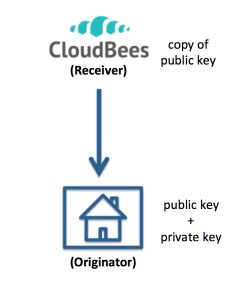 As you can see, there’s not really much difference in this use case. In terms of the golden rule, you are still the originator of the git command. Since you are initiating the git command, you need to have a public and private key and have communicated your public key to CloudBees prior to downloading the code. Here is their documentation on this issue.

This is the most interesting use case. Assume you want to set up continuous integration, in which CloudBees pulls code from a GitHub repository whenever a change is pushed to that repo, then builds and tests the system automatically. Here is an illustration: 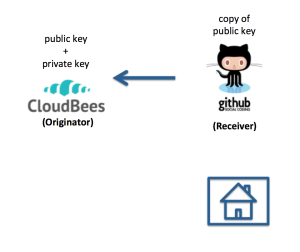